Is the Paddle Latch Acceptable for the Main Entrance?

In an office building with an occupant load of 400 people, is a paddle latch code compliant for the main entrance door? Or is panic hardware required? 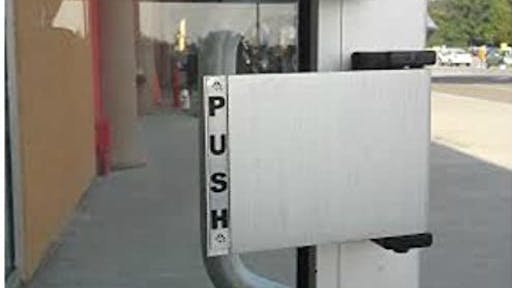 I couple of years ago I got serious about learning to speak Spanish. I’m still working on it, but one thing that’s become crystal clear is my need to hear something several times in different contexts before it sticks.The same goes for codes, as illustrated by today’s Quick Question. I’ve written before about where panic hardware is required, offered that info up in video format, and presented a webinar about panic hardware. But it can be tough to apply the requirements to a particular door on a particular building.

A deadlatch operated by a paddle is a common hardware application on aluminum storefront doors. When the door is locked, the paddle retracts the deadlatch for egress. If mounted within the allowable range of 34-48 inches AFF (34-44 inches in California), paddle latches are compliant with the accessibility and egress requirements for most locations. The paddle operates with one motion, does not require tight grasping, pinching, or twisting of the wrist, and allows egress with no special knowledge or effort.

So what about an office building with a calculated occupant load of 400 people? Is the paddle latch acceptable for the main entrance?

The answer – maybe.  Here’s how to find out:

If the door does not require panic hardware, the paddle latch is acceptable. According to the International Building Code (IBC), the door would require panic hardware if it is serving an assembly or educational occupancy with an occupant load of 50 people or more, or a high hazard occupancy of any occupant load (here’s how to calculate the load). There would almost never be a high hazard occupancy in an office building – educational occupancies in an office building would also be uncommon.

If the office building does not include any assembly spaces with an occupant load of 50+ (IBC) or 100+ (NFPA), panic hardware is not required by the model codes, and the paddle latch is acceptable. Because the office building would be classified as a business occupancy, it could have 400, 4,000, or even 40,000 occupants and the model codes would not require panic hardware – as long as the building does not contain assembly, educational, or high hazard occupancies.

These door hardware solutions help improve the facility safety by minimizing the spread of germs through high-frequency touch points within a building.
April 12, 2021