December construction employment was only 3% below the pre-pandemic peak in February 2020, compared to overall nonfarm payroll employment, which was down 6.5% 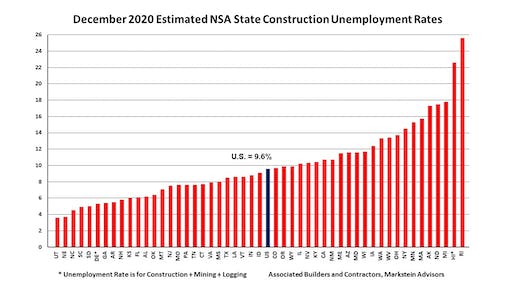 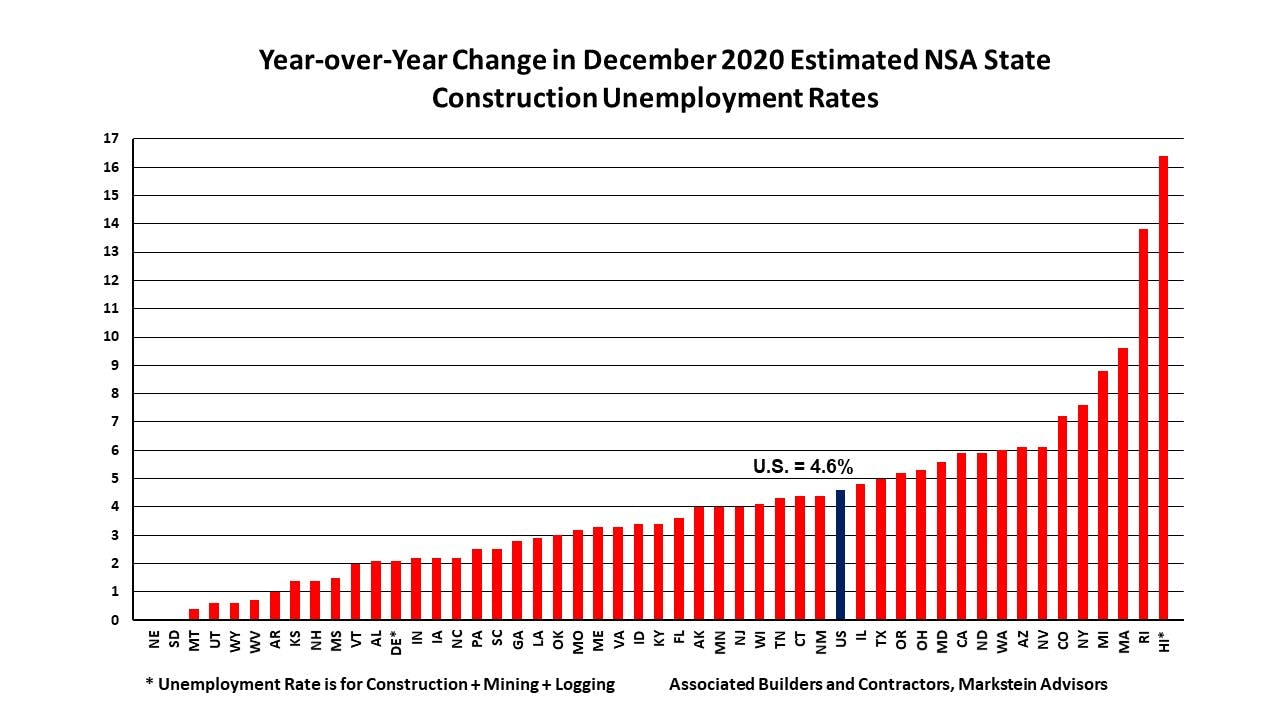 By comparison, overall nonfarm payroll employment was down 6.5% from its peak in February 2020. The combination of the pandemic and winter weather resulted in an increase in not seasonally adjusted construction unemployment rates for the nation and most states. 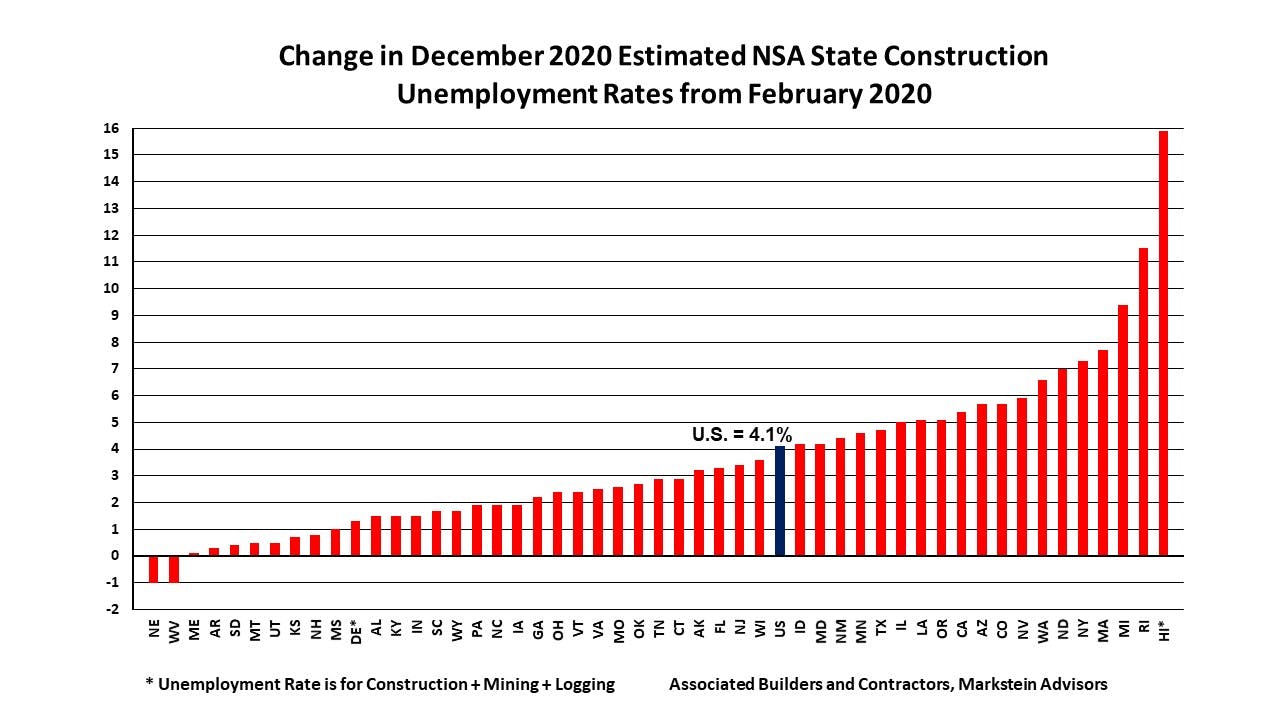 “With the distribution of vaccines, there is now a path to defeating COVID-19 and returning the economy and the construction industry to its pre-pandemic levels. The speed with which we enter a new normal depends on how fast these vaccines are delivered and how much of the population is vaccinated,” said Bernard M. Markstein, Ph.D., president and chief economist of Markstein Advisors, who conducted the analysis for ABC. “Federal spending to support the economy is also key. Spending on much-needed repairs to improve the nation’s infrastructure will benefit both the construction industry and the economy’s long-term growth prospects.”

Because these industry-specific rates are not seasonally adjusted, national and state-level unemployment rates are best evaluated on a year-over-year basis. However, due to the uncertainty caused by the pandemic, month-to-month comparisons are useful.

The national NSA construction unemployment rate was up 2.3% from November 2020 to December 2020. Since the data series began in 2000, the historical pattern of change in rates from November has been an increase every year. Among the states, 45 had higher estimated construction unemployment rates than in November, four had lower rates, and one was unchanged (Montana).

The states with the lowest December 2020 estimated NSA construction unemployment rates in order from lowest to highest were:

All of these states except for South Dakota were in the top five in November 2020. Utah had the lowest rate in December and November.

The states with the highest December 2020 estimated NSA construction unemployment rates in order from lowest to highest were: 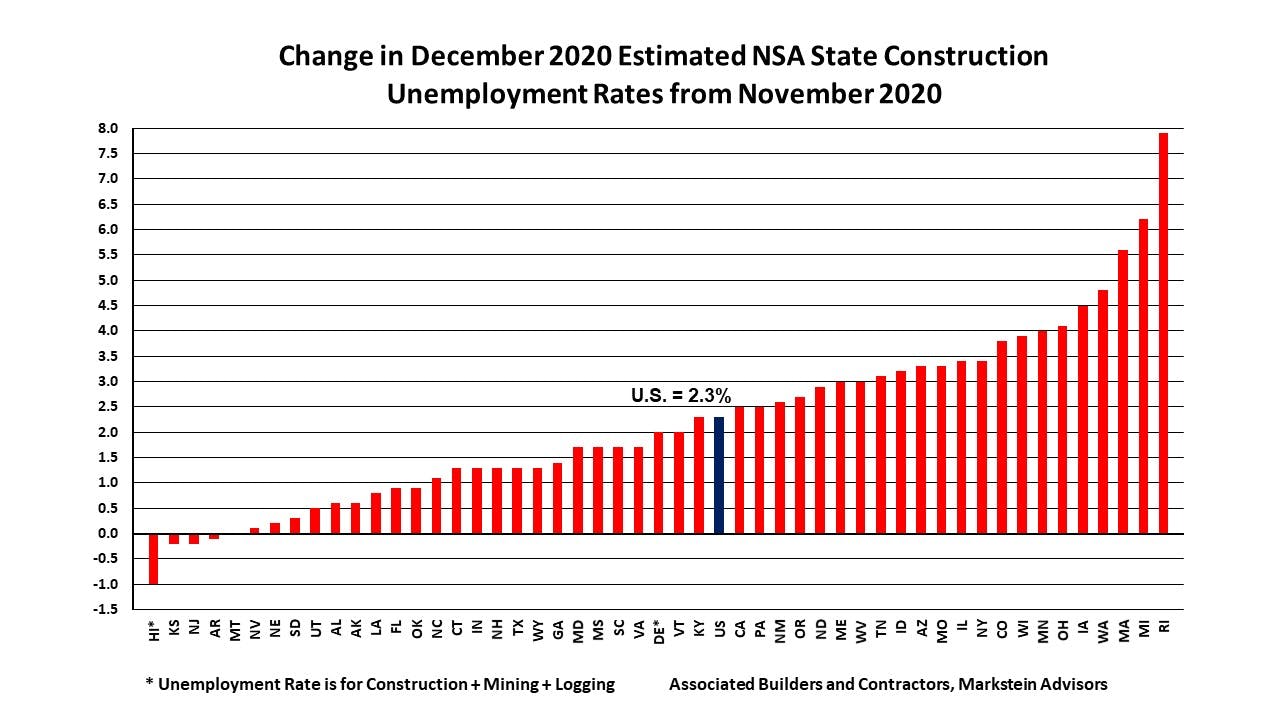 When it comes to Paycheck Protection Program (PPP) loans, forgiveness is more complicated than you think.
Garry Bartecki
April 12, 2021

A major reason small to medium size construction companies struggle is caused by not implementing an effective sales and marketing plan.
George Hedley
January 20, 2021
Follow Us