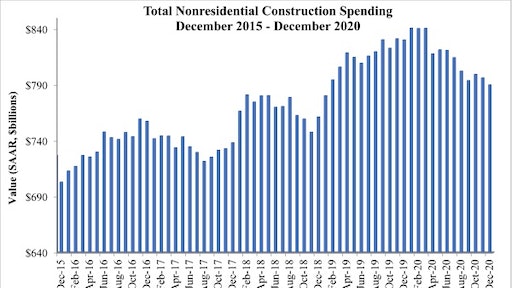 “The slump in nonresidential construction spending has now persisted for several months,” said ABC Chief Economist Anirban Basu. “Leading indicators are not promising, including ABC’s Construction Backlog Indicator, which remains 1.5 months lower than in December 2019. The pandemic has ravaged commercial real estate fundamentals, and this sector will likely remain weak for years to come due to behavioral shifts caused by the COVID-19 pandemic. That weakness will limit the initial pace of private construction spending recovery in a number of key segments, even as the pandemic fades in the rearview mirror.

“Given weakened state and local government finances, public construction’s trajectory is not especially promising either,” said Basu. “Near-term spending growth is partially a reflection of what had been a strong economy pre-pandemic and the improvement in public finances that accompanied the lengthiest economic expansion in America’s history. Backlog was plentiful coming into the crisis, and that continues to be reflected in public spending data. Emergency construction spending has also boosted spending as decision-makers look to expand the capacity of healthcare delivery in the near-term.

“While it is true that the broader economy is poised for rapid economic recovery later this year, nonresidential construction is positioned to lag,” said Basu. “This is often the case given the tighter lending standards and the higher commercial vacancy rates that accompany periods of economic stress. However, the lag in industry recovery could be even lengthier this time around as the specter of remote work threatens the office market, online meeting platforms interfere with recovery in business travel, and more people shop from home as opposed to on Main Street and in malls. The implication is that absent a meaningful federal stimulus package, many nonresidential construction firms and their workers will face a period of vulnerability.”

The not seasonally adjusted construction unemployment rates rose nationally and in 33 states, fell in 15 states and were unchanged in two states.
Associated Builders and Contractors Inc. (ABC)
April 30, 2021

Dodge Momentum Index rose 1.7% in March and is up 11% year-over-year as institutional projects in planning increase.
Dodge Data & Analytics
April 7, 2021

Almost all of the job loss was in nonresidential construction, a segment in which employment declined by 60,800 jobs on net in February.
Associated Builders and Contractors Inc. (ABC)
March 5, 2021

Prioritize what improvements will make the biggest difference in your company the fastest by identifying what you need to improve or work on over the next three months.
George Hedley
March 3, 2021

This new line of partition hardware from Scranton Products and Trimco's Healthy Hardware are manufactured to kill 99.9% of infectious bacteria when cleaned regularly.
February 22, 2021
Follow Us