The construction unemployment rate rose to 7.5% in June. Unemployment across all industries increased slightly from 5.8% in May to 5.9% last month.

The construction industry lost 7,000 jobs on net in June, according to an Associated Builders and Contractors analysis of data released today by the U.S. Bureau of Labor Statistics. Despite that setback, the industry has recovered 875,000 (78.6%) of the jobs lost during the earlier stages of the pandemic.

Nonresidential construction employment declined by 22,600 positions on net in June, with the majority of losses sustained among nonresidential specialty trade contractors, a segment that lost 14,800 net jobs. Heavy and civil engineering employment fell by 10,900 jobs, while the nonresidential building sector added 3,100 jobs on net.

The construction unemployment rate rose to 7.5% in June. Unemployment across all industries increased slightly from 5.8% in May to 5.9% last month.

“The nonresidential construction industry has received negative economic data for two consecutive days,” said ABC Chief Economist Anirban Basu. “Yesterday, we learned that nonresidential construction spending declined across a broad spectrum of private and public segments in May. Today, we learned that the industry lost jobs in June. None of this is consistent with optimistic projections for industry activity generated by ABC’s Construction Confidence Indicator. Perhaps a turnaround is right around the corner, but it has failed to emerge thus far.

“While many will extol the virtues of the headline jobs number and place substantial focus upon that, as a practical matter, today’s employment report is an utter mess,” said Basu. “That’s really the headline—that the numbers delivered by the government today are, when viewed collectively, nonsensical or at least very difficult to reconcile. According to the government survey of employers, America’s economy added 850,000 jobs last month. That was meaningfully above consensus expectations after two months of disappointing numbers. But a survey of households for precisely the same period indicates that the nation lost 18,000 jobs. The household survey also indicates that the labor force participation rate failed to rise, that the number of unemployed people in America rose by 168,000 and that the official rate of unemployment increased from 5.8% in May to 5.9% in June.

“In other words, today’s data regarding the U.S. labor market supply more questions than answers,” said Basu. “Most economists pay more attention to the establishment survey, which means that most assessments regarding today’s jobs report will be upbeat. Nonetheless, contractors and other economic stakeholders should be concerned by ongoing labor market dysfunctions, including an inordinate level of difficulty finding workers, elevated numbers of people quitting their jobs and rising wages. While wage growth moderated in June, that may be because disproportionate numbers of entry-level workers re-engaged the economy given the lapse of enhanced unemployment benefits in certain states and their imminent cessation elsewhere. The entry of these workers in large numbers would tend to suppress average wage measures. Most contractors are likely continuing to experience substantial upward wage pressure.” 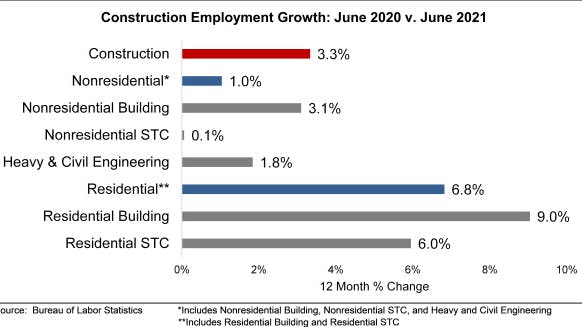