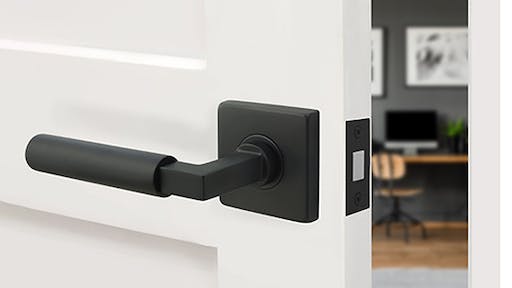 INOX has introduced the TL7 Magnetic Tubular Latch, the industry’s first magnetic latch for interior doors. The new hardware solution uses magnetism to latch the door rather than an old-fashioned strike-plate lip that physically forces the latchbolt into the strike’s box, providing quieter, sleeker mechanical movement and additional aesthetic options.

Unlike standard latches, the TL7 Magnetic Tubular Latch keeps the bolt retracted when the door is open. Then, magnets composed of the rare-earth element neodymium located in the strike latch instantly and quietly snap the bolt in place to latch the door, rendering both the latch and the strike completely invisible. Turning the lever retracts the bolt for easy passage.

TWEET THIS: The TL7 Magnetic Tubular Latch from @INOX_Hardware is the industry's first magnetic latch for interior doors. The system uses neodymium magnets to smoothly pull the bolt into place to latch the door, eliminating the need for a lip strike. https://youtu.be/ZewLz6bcI0w

“Residential hardware has become sleeker, quieter and more functional, and spatial considerations have increased the popularity of doors that are completely flush against the wall,” said Qianyan Cheng, INOX cofounder and Vice President of Product Development. “The TL7 Magnetic Tubular Latch completely rethinks how a latch can operate and INOX is proud that we have developed this innovative product for interior designers, custom home builders and homeowners.”