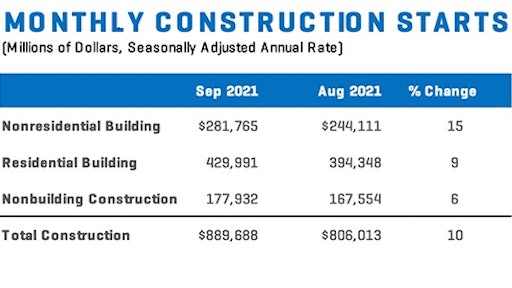 “Construction starts have struggled over the last three months as concerns over rising prices, shortages of materials and scarce labor led to declines in activity,” stated Richard Branch, Chief Economist for Dodge Construction Network. “The increase in September, however, partially allays the fear that construction is headed for a free-fall and shows that owners and developers are still ready to move ahead with projects.

“Starts are likely to continue to trend in a positive but sawtooth fashion in the coming months until a more balanced recovery takes hold next year,” he added.

Through nine months, residential starts were 25% higher than in the same period one year ago. Single-family starts gained 26% and multifamily starts grew 20%.

The largest multifamily structures to break ground in September were the $300 million Islablue Apartments in Long Beach, NY; the $256 million Station Square Apartments (phase 2A) in Ronkonkoma, NY; and the $215 million 906 W. Randolph mixed-use project in Chicago, IL.

The largest nonbuilding projects to break ground in September were the $500 million Whale offshore oil field pipeline near Houston, TX;, the $485 million Chimney Hollow Reservoir Dam in Berthoud, CO; and the $450 million repairs to docks at the United States Coast Guard Station in Fort Macon, NC. 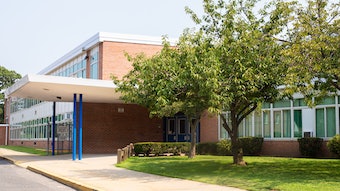