Recent acceleration of already speeding housing price increases are reviving mortgage-backed securities and have tripped the early-warning thresholds of some novel statistical tools being monitored post-Great-Recession. 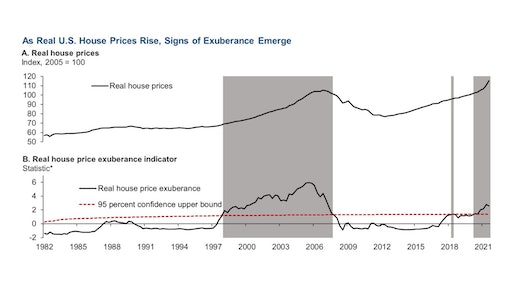 Shaded areas indicate periods of inferred exuberance. Real house prices have risen much more steeply in the past year than in the run-up to the Great Recession. The Exuberance Index in the bottom panel tests market temperature and the confidence upper bound is the abnormality threshold. Current readings indicate U.S. housing showing signs of exuberance for more than five quarters through Q3 2021.
Federal Reserve Bank of Dallas

Soaring U.S. home prices and indefatigable housing demand give researchers and economists at the Federal Reserve Bank of Dallas reason to believe our housing market is coming "unhinged from fundamentals." Potential for a new bubble hasn't been widely supported, but the Dallas Fed says new evidence is emerging.

"Our evidence points to abnormal U.S. housing-market behavior for the first time since the boom of the early 2000s," the researchers wrote. "Reasons for concern are clear in certain economic indicators – the price-to-rent ratio, in particular, and the price-to-income ratio – which show signs that 2021 house prices appear increasingly out of step with fundamentals.”

The median U.S. home price in February was about $357,300, up about 34% from January 2020, according to National Association of Realtors data. Fortune.com reports year-over-year U.S. home price growth accelerated to 19.2% in January. That's up from the 11.3% uptick posted at the same time last year. The latest jump is also well above the peak annual rate (14.5%) posted in the lead-up to the 2008 housing bubble.

A novel statistical toolkit growing out of the boom before the Great Recession is being used to assess the health of the U.S. housing market in real time, and the Dallas Fed’s researchers argue that causes underlying this run-up differ from those that preceded the 2007 – 2009 Global Financial Crisis. They point out that prices of assets – such as homes – rising much faster than market fundamentals can justify, nevertheless, define the primary expansionary phase of a bubble.

The Dallas Fed’s International House Price Database team is working in partnership with a global network of scholars collaborating under the International Housing Observatory, to produce datasets and statistics that characterize a key indicator of a market bubble – what’s called exuberance. The methodology uses novel statistical methods to continuously monitor housing markets—in the U.S. and around the world—to detect symptoms and signal the presence of emerging housing booms.

Real house prices can diverge from market fundamentals when widespread belief that today’s price increases will continue. When many home investors act on this belief and negotiate purchases from a “fear of missing out,” they raise prices along with to match their expectations of continuing house-price gains.

It’s a self-fulfilling mechanism that can drive exponential price growth, shifting housing market dynamics out of alignment with economic fundamentals until investors become cautious, policymakers intervene, the flow of money into housing dries up and a housing correction or even a bust occurs.

Indices derived for the types of exuberance that can inflate a bubble – house prices, the ratio of prices to rent and ratio of house prices to disposable income – plotted over time show striking similarities to the last housing boom (see the charts).

How ‘abnormal’ do they mean?

“Our evidence points to abnormal U.S. housing market behavior for the first time since the boom of the early 2000s,” the Dallas Fed researchers report. “Reasons for concern are clear in certain economic indicators – the price-to-rent ratio, in particular, and the price-to-income ratio – which show signs that 2021 house prices appear increasingly out of step with fundamentals.”

“Based on present evidence, there is no expectation that fallout from a housing correction would be comparable to the 2007 – 2009 Global Financial Crisis in terms of magnitude or macroeconomic gravity,” the researchers say. “Among other things, household balance sheets appear in better shape, and excessive borrowing doesn’t appear to be fueling the housing market boom.”

But Bloomberg.com calls out a development uncomfortably associated with one of the catalysts of the Great Recession. Starting April 1, Fannie Mae and Freddie Mac will begin charging higher fees to guarantee loans for vacation homes and particularly large mortgages. Those guarantees help lenders like banks bundle the loans into bonds that can be readily sold and traded.

With the guarantees becoming more expensive, some lenders say they expect to stop paying for them, and to instead package the home loans into riskier bonds known as private-label mortgage-backed securities (MBS). The market for selling those bonds peaked in 2005 and 2006, when that housing bubble was still inflated.

The value of private-label MBS issued in the past three years has nearly doubled to a level equal that in 2001, early in the housing-market exuberance of that era. Last year’s MBS debt value of $272 billion is a post-Recession record in a decade when annual issues had totaled less than $100 billion, but it was just 40% of the value issued at the mid-point of MBS’s initial rise, in 2003.