Starts rose about the same percentage as existing home sales fell in February, just before the Federal Reserve raised interest rates, war in Ukraine rattled the global economy and COVID surged in Asia. 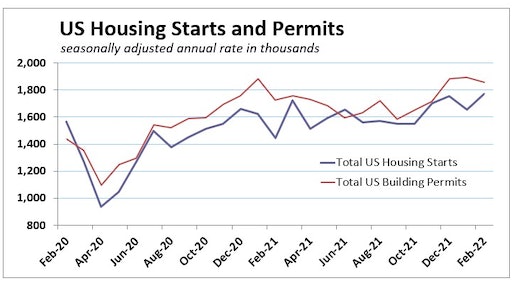 Housing construction starts leaped 6.8% in February and 22% compared with the same time a year ago. It’s the fastest building-growth rate since 2006, but the U.S. Census Bureau released the data within a day of the Fed raising the federal funds rate, reversing the central bank’s pandemic-stimulus stance – a move that all but ensures mortgage rates will continue the climb started in October.

Starts in the multifamily sector, which includes apartment buildings and condos, continued to gain ground, rising 9.3% to a 554,000 annual rate.

“Due to supply-chain effects, there are 152,000 single-family units authorized but not started construction—up 24.6% from a year ago,” says Dietz. “The February reading was a four-month high of such delayed starts.”

The number of building permits for new housing construction slipped 1.9%, with small declines for single-family and multifamily authorizations.

In March, single-family builder confidence decreased two points to a level of 79, according to the NAHB/Wells Fargo Housing Market Index (HMI). After peaking at a level of 90 in November 2020, builders have reported ongoing concerns over elevated lumber, OSB and other construction costs, as well as delays in obtaining building materials. NAHB’s forecast projects growing labor shortages as the unemployment rate trends lower in the quarters ahead. The March HMI also reported a notable drop in sales expectations six months out, a possible indication of growing demand-side concerns over higher interest rates, particularly now that the Fed has committed to tighten monetary policy.

On March 16, the Federal Open Market Committee (FOMC), the panel of Federal Reserve officials responsible for setting monetary policy, increased the federal funds rate by 0.25 percentage points to a range of 0.25% to 0.5%. TheHill.com explains that the federal funds rate is the benchmark interest rate banks charge on loans to each other and is used to set borrowing costs on credit cards, automobile loans and mortgages.

"The invasion of Ukraine by Russia is causing tremendous human and economic hardship. The implications for the U.S. economy are highly uncertain, but in the near term the invasion and related events are likely to create additional upward pressure on inflation and weigh on economic activity," according to the FOMC statement released with the funds-rate change.

“With appropriate firming in the stance of monetary policy, the Committee expects inflation to return to its 2% objective and the labor market to remain strong. In support of these goals, the Committee decided to raise the target range for the federal funds rate to 1/4 to 1/2 percent and anticipates that ongoing increases in the target range will be appropriate. In addition, the Committee expects to begin reducing its holdings of Treasury securities and agency debt and agency mortgage-backed securities at a coming meeting.”

In December’s quarterly Summary of Economic Projections (SEP), in which all 16 current FOMC members submit their individual forecasts, the median forecaster looked for 75 basis points of tightening this year (.25 = 1/4 percent = 25 basis points). The median forecaster now thinks that 175 basis points (bps) of tightening will be warranted in 2022 with an additional 75 bps of rate hikes next year. The futures market is now pricing in seven 25-bps rate increases.

The median SEP forecast for the year-over-year rate of PCE inflation, which is the Fed's preferred measure of consumer price inflation, at the end of 2022 jumped from 2.6% in the December SEP to 4.3% at present.

Fed Chairman Jerome Powell has called high inflation the biggest threat to an otherwise strong economy and previously acknowledged to members of Congress the bank had misjudged how long it would last.

“As we wrote in our recent U.S. Monthly Economic Outlook, ‘the Federal Reserve has earned credibility over the past few decades as a guardian of price stability, and we sense that most officials do not want to squander that credibility,’” says Jay Bryson, Ph.D., chief economist at Wells Fargo Securities. “Therefore, unless the U.S. economy comes completely off the rails in the near term, Fed rate hikes at the next few meetings seem more or less like ‘sure bets.’ Thereafter, the Committee may become much more data dependent. That said, we would also point out that the outlook is unusually uncertain.”

"All signs are that this is a strong economy, indeed, one that will be able to flourish — not to say withstand, but certainly flourish, as well — in the face of less accommodative monetary policy," TheHill.com reports Powell saying in a press conference following the rate-increase announcement.

"We do feel the economy is very strong, and well positioned to withstand tighter monetary policy."

Wells Fargo Economics points out that the 30-year conventional fixed mortgage rate was up 40 bps from its February average even before the Fed action had a chance to register significant retail changes.

“While that increase is likely to present a hurdle for some potential home buyers, the biggest affordability challenge has been soaring home prices and the paucity of homes available for sale, particularly homes priced at or below the median price (of new and existing homes) of $363,800,” says Mark Vitner, senior economist at Wells Fargo Securities.

Heightened concerns about rising interest rates had probably already motivated some fence-sitters to get serious about home shopping late in 2021, “Which likely contributed to January's surprising 6.6% rise in existing home sales,” says Vitner. “Sales were poised for a pullback, with pending home sales falling a cumulative 10.5% from October to January.”

That takes some sting out of February’s 7.2% drop in existing home sales. Now the calculus for home builders might include a nearer-term estimate of when decreasing affordability might begin to cool housing demand. Buyers have likely missed their opportunity to lock in ultra-low mortgage rates.

“Mortgage rates are still historically low, however,” says Vitner. The rate for a 30-year conventional mortgage has been higher than its current level for more than 90% of the time over the past 30 years. While that nugget does not make a home more affordable today than they were two months ago, it serves as an important reminder that home sales should remain fairly strong even if mortgage rates rise a bit further.”

It's an encouraging perspective. If the world’s No. 3 oil producer pursuing conquest in Ukraine doesn’t create an energy crisis and Asia’s growing COVID surge doesn’t crest across the Pacific, housing should continue to drive U.S. construction growth.