Positivity for cocaine and marijuana is climbing among federally mandated testing of safety-sensitive workers. Positives are rising faster in post-accident tests than preemployment for cocaine, marijuana, opiates and oxycodones. 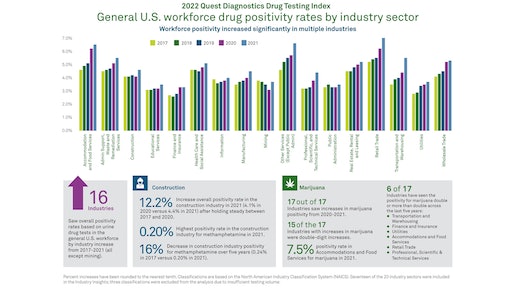 After holding steady between 2017 and 2020, positive results for drug tests of construction workers increased more than 12% in 2021, according to the 2022 Quest Diagnostics Drug Testing Index (DTI).

The rate of positive drug test results among America's total workforce reached its highest rate last year since 2001 and was up more than 30% in the combined U.S. workforce from an all-time low in 2010-2012, according to analysis by Quest Diagnostics. In the context of widespread labor recruiting and retention challenges, 2021 drug positivity in the economy at large increased in post-accident tests at a faster rate than pre-employment tests for cocaine, marijuana, opiates and oxycodones.

The overall positivity rate in the combined U.S. workforce, based on nearly nine million urine drug tests, was up to 4.6% compared to 4.4% in 2020 and up 31.4% from the all-time low of 3.5% just 10 years ago. The combined U.S. workforce includes the general U.S. workforce of mostly company-policy testing by private employers as well as the federally mandated, safety-sensitive workforce, which includes federal employees and the transportation and nuclear power industries, and can include workers such as pilots, truck drivers, train conductors and others required to drug test under federal legislation.

"Employers are wrestling with significant recruitment and retention challenges as well as with maintaining safe and engaging work environments that foster positive mental and physical wellbeing," said Keith Ward, general manager and vice president, Quest Diagnostics Employer Solutions. "Our Drug Testing Index data raises important questions about what it means to be an employer committed to employee health and safety. Eager to attract talent, employers may be tempted to lower their standards. In the process, they raise the specter of more drug-related impairment and worksite accidents that put other employees and the general public in harms' way."

"It is important for workers to know that certain employers are required to test for marijuana under federal law and if they use marijuana, they can still lose their jobs," said Barry Sample, PhD, senior science consultant for Quest. "People who use drugs during working hours or before work can still be impaired and dangerous to co-workers, the general public and themselves."

In 2021, positivity in the general U.S. workforce based on oral fluid was 7.3% in 2021, a decline of 46.3% compared to 2020 and 29.8% compared to 2017. The drop in oral fluid-positivity was driven by a decline in the number of pre-employment tests that included screening for marijuana. However, of those tests that screened for marijuana, the oral-fluid drug positivity rate for marijuana was 14.8% in 2021, an increase of 20.3% compared to 2020 and up 68.2% over five years. At the same time, the positivity rate for cocaine increased 46.6%, its highest spike since 2006. Methamphetamine increased 26.4%, exhibiting year-over-year increases for the last five years.

Oral fluid tests generally have a shorter window of drug detection than urine, and can detect some drugs faster, in a matter of minutes versus hours. Oral fluid collection also has the advantage of being observed, making it harder to subvert the testing process.

"Drug use affecting the work environment is a complex problem that is not going away," said Jenny Burke, vice president of impairment practice, National Safety Council. "When workers use impairing substances, it can create incidents that compromise the safety of other workers and, in some cases, the general public. Employers should have the right and ability to maintain a substance-free workplace and the use of drug testing, including oral fluid in addition to urine. NSC supports policies and procedures that ensure safe and healthy workplaces."

In 2021, urine post-accident testing in the U.S. general workforce for the drugs marijuana and cocaine the positivity rate was 63.4% and 266.7% higher, respectively, as compared to pre-employment tests. For the two groups of semi-synthetic opiate drugs – opiates (hydrocodone/hydromorphone) and oxycodones (oxycodone/oxymorphone) – in these tests, post-accident positivity was 316.7% and 200% higher, respectively, than in pre-employment testing.

Pre-employment drug tests are meant to be a deterrent in hiring workers whose drug-use behavior may cause unsafe work conditions or poor work performance. Post-accident testing is conducted to evaluate whether drug use may have played a role in the workplace incident prompting the drug test.

"The increase in post-accident positivity is alarming and suggests more drug-associated accidents may be occurring even with employers with pre-employment drug testing in place," Dr. Sample said. "The high cost of work accidents cannot be understated. While employers often think of accidents in terms of wage and productivity losses, medical expenses, and administrative expenses, accidents also impact morale, competitiveness and recruiting. Given that employers are in a war for talent, creating a safe, healthful work environment is critical for attracting and retaining people."

Trends for cocaine and opiates

Positivity for opiates and oxycodones in the general U.S. workforce decreased last year and over five years

For an interactive map of the Drug Testing Index with positivity rates and trend lines by drug categories and three-digit ZIP code in the United States, visit DTIDrugMap.com.

About the Quest Diagnostics DTI

The Quest Diagnostics Drug Testing Index is a series of reports that provide insights into trends in workforce drug use based on positivity rates of deidentified laboratory tests performed by Quest Diagnostics for a range of illicit, legal and prescription drugs. It examines test results according to three categories of workers: federally mandated, safety-sensitive workers; the general U.S. workforce; and the combined U.S. workforce. Federally mandated, safety-sensitive workers include pilots, bus and truck drivers, and workers in nuclear power plants, for whom routine drug testing is mandated by government agencies like the Department of Transportation, Nuclear Regulatory Commission and the Department of Defense.

The strengths of the DTI analysis include its large, nationally representative sample size, longitudinal monitoring, a testing population that is generally reflective of the U.S. workforce and the quality of the company's drug testing services to confirm positive results. Limitations include analysis only of employers that perform drug testing with the company, and a lack of exact cross-specimen comparisons due to variations in substances for which employers test. Quest Diagnostics has analyzed annual workplace drug testing data since 1988 and publishes the findings as a public service.