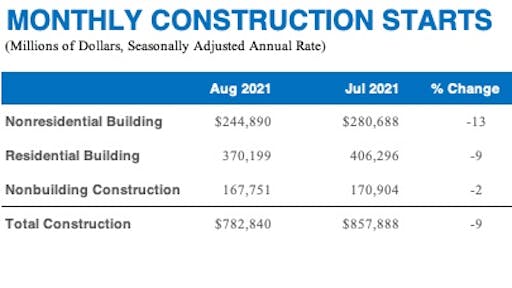 “Construction starts have hit a rough patch following the euphoria seen in the early stages of recovery from the pandemic,” according to Richard Branch, chief economist for Dodge Data & Analytics. Total starts continued their monthly decline, falling 9% in August to a seasonally adjusted annual rate of $782.8 billion, with all three industry sectors losing ground.

“The Delta variant has raised concern that the fledgling economic recovery is stalling out, undermining the already low level of demand for most types of nonresidential buildings,” Branch indicated. “Additionally, significant price increases for construction materials, logistic constraints, and labor shortages are making a challenging situation worse.” 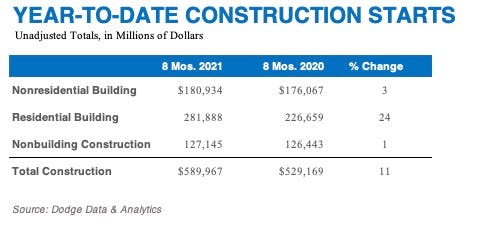 Residential building starts, which have led much of the construction recovery, continued to weaken, falling 9% in August to $370.2 billion, based on a 12% decline in single-family and a marginal gain (+1%) in multifamily. The largest multifamily structures to break ground for the month were:

Despite the month-over-month decline, residential building starts well above last year’s levels year to date (+24%). Single-family starts are up 29% and multifamily has risen 13% through the first eight months of 2021 vs. the 2020.

For the 12 months ending in August 2021, total residential starts were 21% higher compared to the same period in 2020. Single-family starts gained 28% and multifamily starts were up 2% on a 12-month sum basis.

Nonresidential building starts saw a 13% decline in August to a seasonally adjusted annual rate of $244.9 billion. Declines were broad-based across building types, with commercial starts down 10%, institutional starts falling 15% and manufacturing plummeting 37% following a sizable increase in the previous month. The only bright spots were seen in retail, parking and public buildings.

Year to date, nonresidential building starts rose 3%, with commercial starts up 2% and manufacturing jumping by 33%. Institutional starts, however, were 1% lower through eight months of 2021. For the 12 months ending in August 2021, nonresidential building starts were 8% lower compared to August 2020. Commercial starts fell 8%, institutional starts dipped 4% and manufacturing starts dropped by 29% year over year.

The largest nonbuilding projects to break ground in August were:

For the eight months of 2021, total nonbuilding starts were up just 1%. The 23% gain in environmental public works and slight uptick in utility/gas plant starts (up less than one percentage) were largely offset by declines in the highway/bridge (-2%) and miscellaneous nonbuilding sectors (-19%).

Nonbuilding construction starts fared only slightly better on a year-over-year basis. For the 12 months ending in August 2021, total starts were 2% lower compared to the same period in 2020. Environmental public works starts rose 22%, with highway and bridge starts up 3%. However, utility and gas plant starts were down 17% and miscellaneous nonbuilding starts fell 22% lower on a 12-month rolling basis.