Investment in nonresidential structures contracted at an annual rate of 7.3% during the third quarter of 2021 and has now contracted during seven of the past eight quarters, according to an Associated Builders and Contractors analysis of data released by the U.S. Bureau of Economic Analysis. The overall economy expanded at a 2.0% annualized rate during the third quarter of 2021.

Other factors are also at work. “Pandemic-induced behavior changes have undermined several commercial real estate segments, causing negative impacts on business travel and office space utilization and large numbers of store closures. Despite low interest rates and plentiful capital available to invest, this translates into fewer projects in these segments," Basu noted. "Since March 2020, construction spending in the lodging and office categories has declined substantially, despite the fact that data center construction, which has surged during the pandemic, is included in the office segment."

Despite the ongoing decline, Basu points out that leading indicators are more upbeat. “Architecture billings have risen for the past eight months, signaling more investment to come, though some of that may be tied to a resurgence of multifamily residential construction. There are also certain segments that continue to generate work for contractors, including structures related to health care, e-commerce and schools. Many state and local governments are flush with cash because of the federal stimulus package passed in March. Public sector construction will help offset some of the weakness in a number of private segments in the future. Moreover, materials prices will likely begin to moderate during the months ahead, which will help induce more project owners to push forward.” 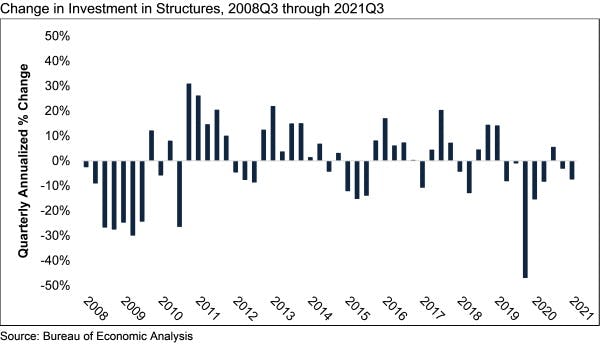