How to Build Resilience During Uncertain Times

Mountain climber Jim Davidson shared his harrowing story of climbing Mount Everest at DHI ConNextions in October in New Orleans. The lessons he learned about resilience and recovering from setbacks, he says, can be applied to the business world. 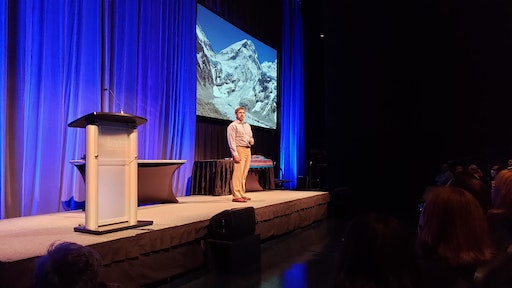 Resiliency can be as important in business as it is in climbing the tallest mountain above sea level, Mount Everest. Mountain climber Jim Davidson shared the lessons he learned about resiliency from climbing Mt. Everest to as part of the keynote address to attendees of the DHI ConNextions conference in October in New Orleans.
Gigi Wood

Resiliency can be as important in business as it is in climbing the tallest mountain above sea level, Mount Everest. Mountain climber Jim Davidson shared the lessons he learned about resiliency from climbing Mt. Everest to as part of the keynote address to attendees of the DHI ConNextions conference in October in New Orleans.

Everyone encounters hardships in their work and daily lives, which can come in the form of changes, challenges and uncertainty, Davidson told the audience. Resiliency is the capacity to recover from those difficulties, sometimes stronger than before. In recent years, the world has been full of challenges and uncertainty, especially as communities learn to adjust, and readjust, to the pandemic.

Davidson considers himself somewhat of an expert on overcoming adversity and developing resilience. In 2015, during his first attempt to climb Mt. Everest, he and his team were trapped at Camp 1 by earthquakes and the avalanches that followed. At first, he felt failure and disappointment, but he was able to change his mindset and start training for another climb. In 2017, he returned to, and summited, Mt. Everest. There were several challenges and setbacks along the way to the summit, he says, but he persevered and made it to the top.

One such challenge was when, while climbing the mountain, he and his friend fell through a glacial crevasse, dropping several dozen feet. His friend was injured and eventually died because of the fall. Losing that friend and notifying his friend’s parents of the death was one of the most difficult situations he’s ever been through, Davidson says.

Davidson’s story was made into an episode of the TV series “I Shouldn’t Be Alive” on the Discovery Channel. He has also written two books about his journeys, “The Ledge: An Inspirational Story of Friendship and Survival” and “The Next Everest: Surviving the Mountain’s Deadliest Day and Finding the Resilience to Climb Again.”

“The main thing that I really learned from that experience was, it’s not so much about some magic set of tricks that I did, it’s a mindset, it’s about having a resilient mindset for tackling these kinds of challenges,” he says.

The way people respond to change often has to do with whether the change is positive or negative.

“When a change gets thrust at us, if you want that change, like a promotion or moving to another city, you’re excited,” Davidson says. “But if you didn’t ask for the change, if it gets shoved down your throat, we tend to not like it and push back.”

Pushing back against change, however, doesn’t solve the problem at hand and adapting to the change doesn’t happen.

“When a change happens, accept it as fast as you can,” he says. “Say, ‘Okay, I didn’t ask for this pandemic, I don’t really want to run my business from home over the internet, but let’s see how we can do it.’ Then you start embracing it.”

When new challenges surface, such as the internet connection failing or kids are loud during the work day, dealing with each one on a smaller scale helps solve them.

“I know a lot of smart people in the industry; you’re all meeting each other at this conference,” he says. “You are all resources to one another and can say, ‘How do you figure this out? How are you doing that with your customers?’ You embrace those challenges as a chance for you to improve yourselves and your company.”

When it comes to uncertainty, such as how long the pandemic will last and other issues that there are no easy answers for, Davidson says to keep moving forward.

“We have to keep moving forward, persevering through one set of problems at a time,” Davidson says. “I hate to tell you, but after you get past one setback, there’s going to be another one; another wave of the pandemic, another economic thing. And that’s when you have to refine yourself to a better version of you, go back to the top and get a resilient mindset to tackle the next set of challenges.”

Resiliency can be built at any age or stage of life, he says. Davidson was 52 years old when he first attempted to summit Mt. Everest. Two years later, he achieved that goal.

Two school safety experts shared the latest best practices in an educational seminar, “Become a Safety and Security Resource to Your School Clients,” at the DHI ConNextions conference on Oct. 20 in New Orleans.
Partner Alliance for Safer Schools (PASS)
October 20, 2021

There are at least three components that can be used as a foundation to effective security approaches.
Bryce Gill
November 18, 2020